Born as an Haute Horlogerie brand, Ateliers deMonaco is all about design, performance, technology, innovation and craftsmanship.

Pim Koeslag, co-founder, master watchmaker and CEO of the brand has made his dream come true when he first created his own tourbillon minute repeater movement. Today, he proudly presents another spectacular masterpiece: the Tourbillon – Oculus 1297 Only Watch.

Equipped with the manufacture dMc-980 calibre, the watch is designed, produced, and assembled in Ateliers deMonaco’s workshops. Its patented tourbillon movement called Tourbillon XP1 (eXtreme Precision 1 minute) is one of the most precise in the world with a tolerance between 0 to 2 seconds per 24 hours.

A major innovation for this timepiece is its 44mm watch case made from a technique used in the automotive industry called forged carbon. For this timepiece, Ateliers deMonaco developed a new method including 18k gold in the process: carbon fibre, gold and resin are mixed together and placed in a mould. The mixture is then heated and pressed to form a block. After the moulding process, the case is meticulously refined to achieve the perfect shape. Thanks to this exclusive method, the case is thus unique.

The timepiece features a multi-layered decentred dial treated with dark grey PVD and is decorated with a lozenge pattern in relief. Roman numerals and dauphine hands finally come to complete the already beautifully detailed dial.

Ateliers deMonaco is proud to donate this one-of-a-kind timepiece to the Only Watch biennial auction, Only Watch supporting the treatment of muscular dystrophy diseases and pushing the boundaries of science. 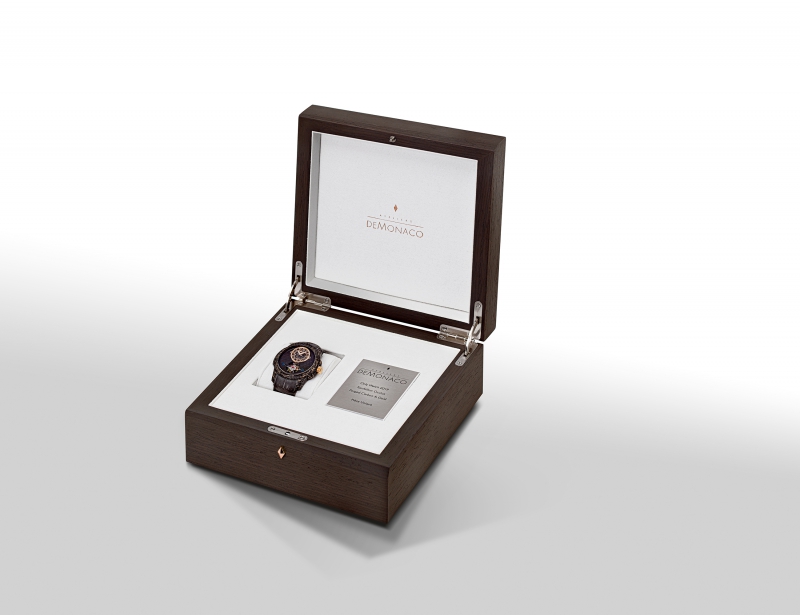 Ateliers deMonaco is proud to be on display at Gomez Y Molina, Marbella, Spain. The most prestigious store of the city. 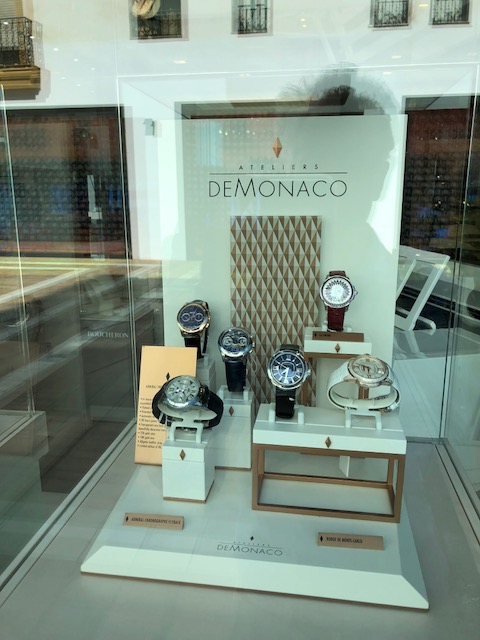 Coming from two distinctive industries, Prato Automobiles and Ateliers deMonaco have yet many common values. Passion, design, performance, technology, innovation, craftsmanship and know-how are the shared values of this car manufacturer and this watch manufacture.

Car manufacturer stem from the passion of two men: Bruno Prata, automobile designer and Rodolphe Tousset, mechanical engineer. Both wanted to create a car with an aggressive and dynamic look and thus giving raw and pure sensations. 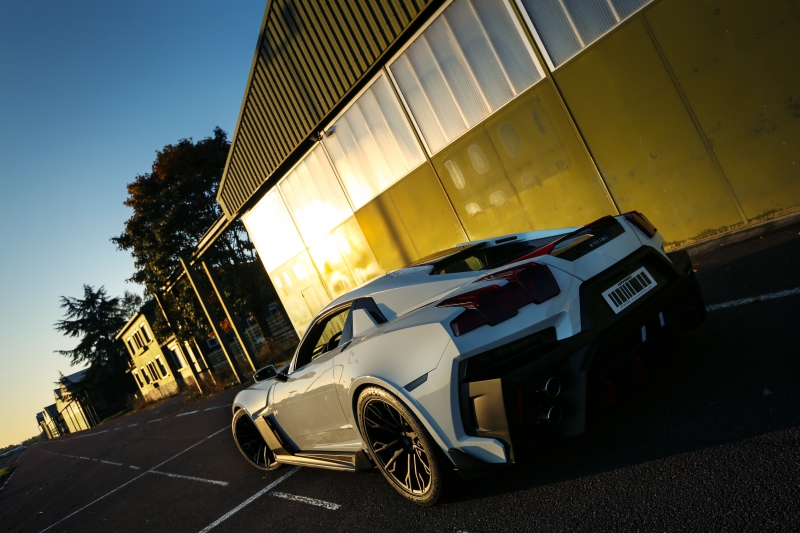 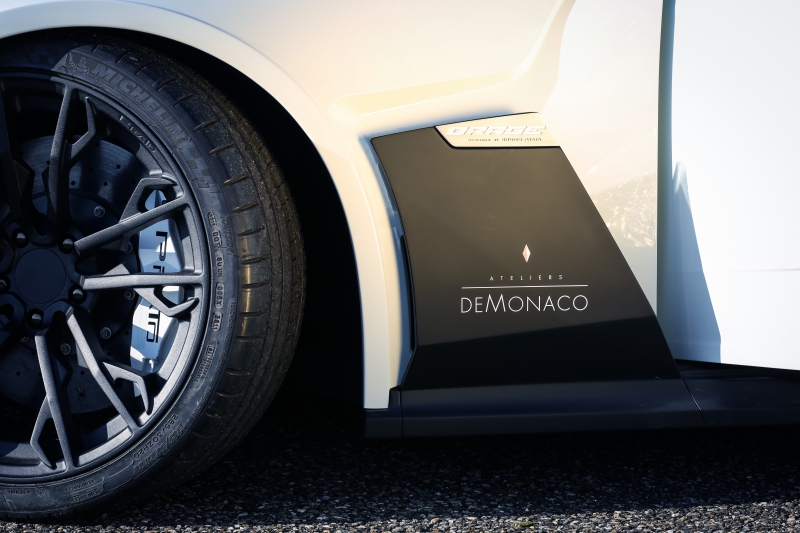 When the automobile industry meets the watchmaking industry

Prato Automobiles and Ateliers deMonaco have worked on a spectacular project which becomes today a reality.

After several years of research and development, the supercar called Orage from Prato Automobiles is born. This car is a pure marvel which offers to its driver an experience and pure, raw and dynamic driving sensations. Thus respects the core values of the car manufacturer. Concerning the technical aspect, three technologies are turning this car to an innovative concentrate: 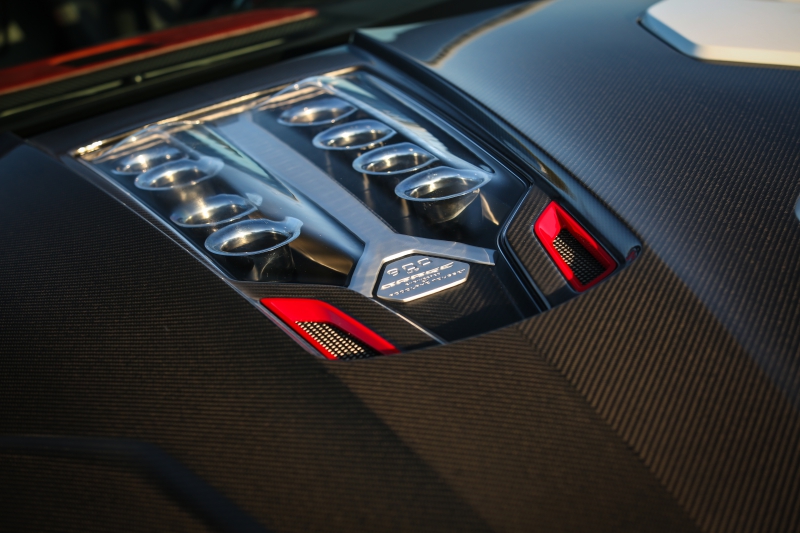 The car is intrinsically linked to the watch Ateliers deMonaco Tourbillon Oculus 1297 ORAGE. Indeed, this timepiece is in actually the hypercar ORAGE’s key. An electronic chip is placed in the watch strap and allow the opening of the car.

The Tourbillon Oculus 1297 Orage watch is equipped with the patented Tourbillon XP1movement which had needed several years of research and development and presents the below technical specifications:

The car and its watch will seduce their users. They both made of ultra-light carbon fiber and are limited to 19 pieces. In addition, the car chassis’ number is carved on the watch dial. The whole making a combo of sporty and refined design. 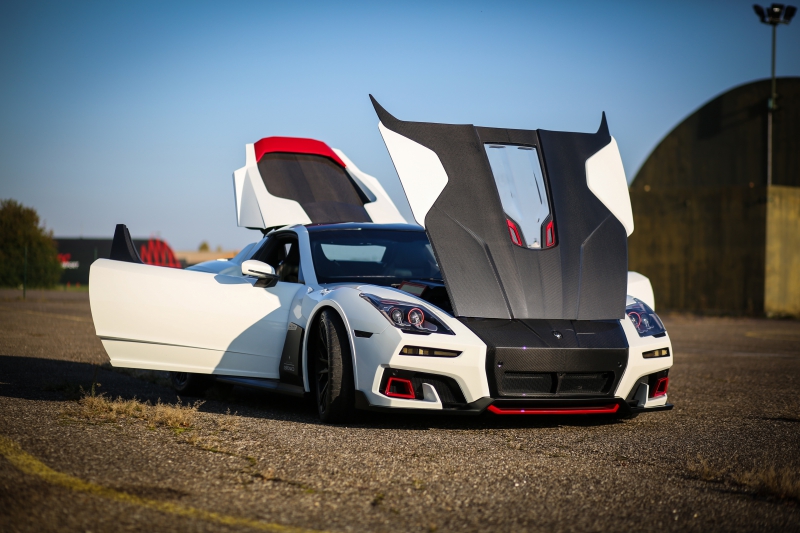 In order to celebrate the first year of the collection Tourbillon Oculus 1297, Ateliers deMonaco unveils two new models with a black titanium case bringing a sportier touch to the collection.

Launched in 2016 and recognisable by its dial composed of small lozenges in relief, this collection is inspired by Monaco’s coat of arms.

Between watchmaking tradition and technological innovation

Emanating from the Tourbillon Oculus 1297 collection, these two new timepieces are equipped with the manufacture dMc-980 calibre. Designed, developed, built and assembled in the Ateliers deMonaco manufacture, this patented tourbillon movement is called: Tourbillon XP1. It is one of the most precise in the world with a tolerance between 0 to 2 seconds per 24 hours.

These two automatic models have the Ateliers deMonaco signature rotor. The latest represents the Principality’s crown which is carefully hand-engraved in 22K gold.

For the first time, the manufacturer envelops its movement with an ultra-light black DLC titanium case.

The dial is made with the use of a new technology: a five axis laser. This latest innovation does not burn the material but enhances it giving the sought-after form. In this case, it is the signature symbol of Ateliers deMonaco: the lozenge. The mention Ateliers deMonaco is also written on the rim of the dial.

The two new models are recognizable by a small dial at 12 o’clock or in rose gold colour or in white gold colour. In order to be faithful to the Oculus model, an opening on the tourbillon’s cage at 6 o’clock allows us to see the heartbeat of the watch.

Lastly, to glorify the whole, the watch is mounted on a black alligator leather strap adorned with a hand-stitched and folding buckle in titanium black DLC for a more convenient use.

In 1297, François Grimaldi, took the fortress of Monaco thanks to a stratagem: dressed like a Franciscan monk, he entered in the stronghold with one of his fellow soldiers. Once inside, he was able to open the door to his little army and seized the fortress.

Coat of Arms of the Grimaldi House pays tribute to this history because they are composed of:

“Comprises a silver shield decorated with red diamonds surrounded by the Order of St. Charles collar. It is placed on a red coat lined with ermine, topped by the royal crown.

Standing at each side of the shield are two monks brandishing raised swords. Below them is a banderol with the royal motto Deo Juvante (with God’s Help).”[1] 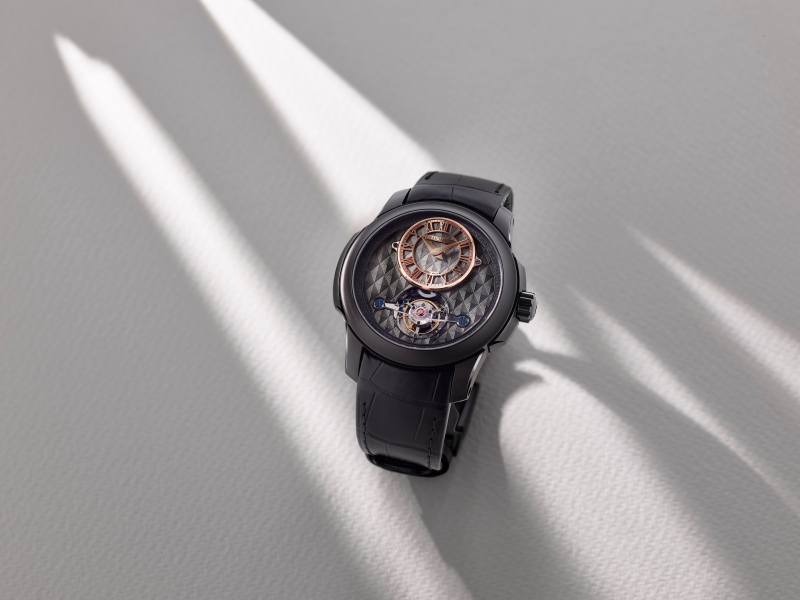 Top collectors, member of the media, retailers and VIPs were invited to discover the history of each brand through in-house developed, manufactured and assembled movements and coinciding timepieces. An on-site watchmaker from the Horological Society of New York encouraged those in attendance to learn more about the complications on display. 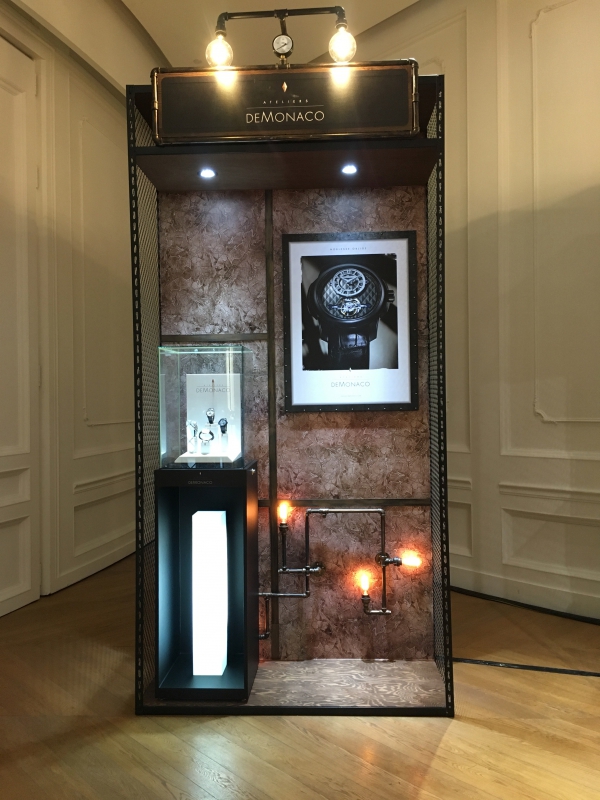 For the 3rd time, Ateliers deMonaco was the official sponsor of the Top Cars Rally. An intimate rally between car lovers and bon vivants.

This year, the race took place in Barcelona, Spain, passing by the Domaine de Verchant in Montpellier. 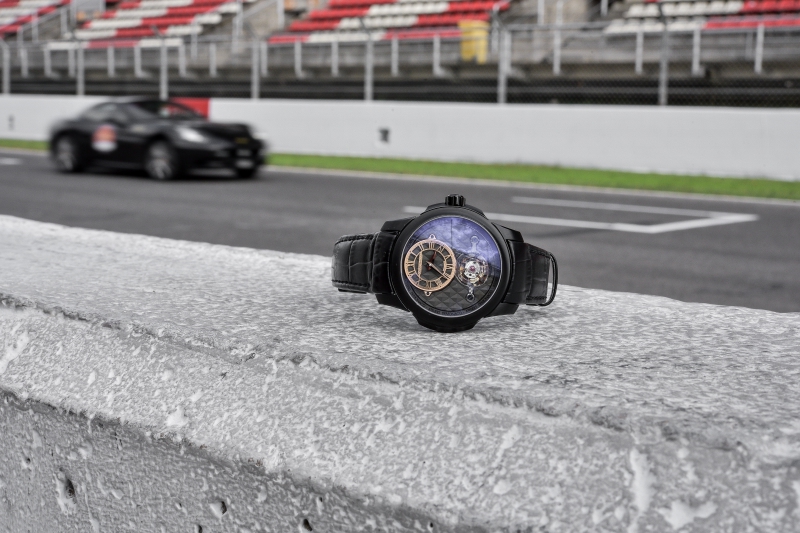 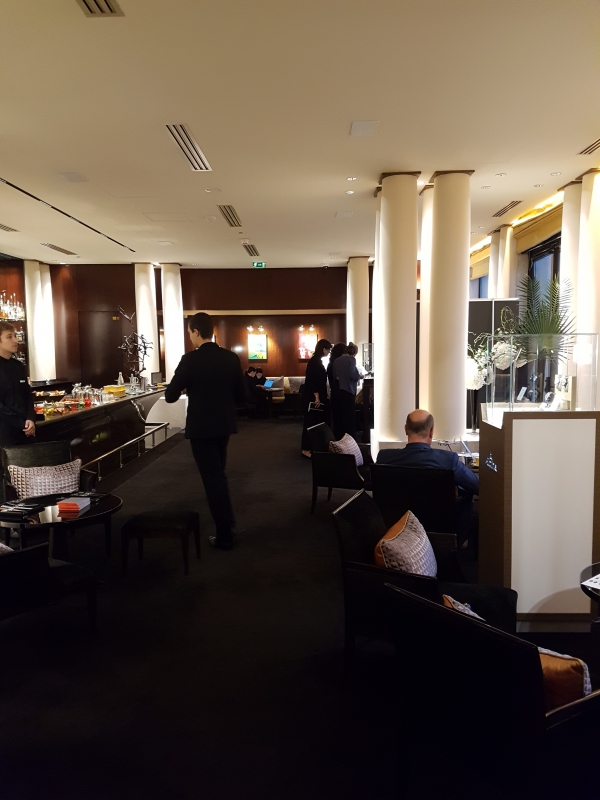 Ateliers deMonaco was delighted to be one of the sponsor of the Retrospective Ollon-Villars 2017 which is an international motor race that took place on August 26th and 27th in Switzerland. 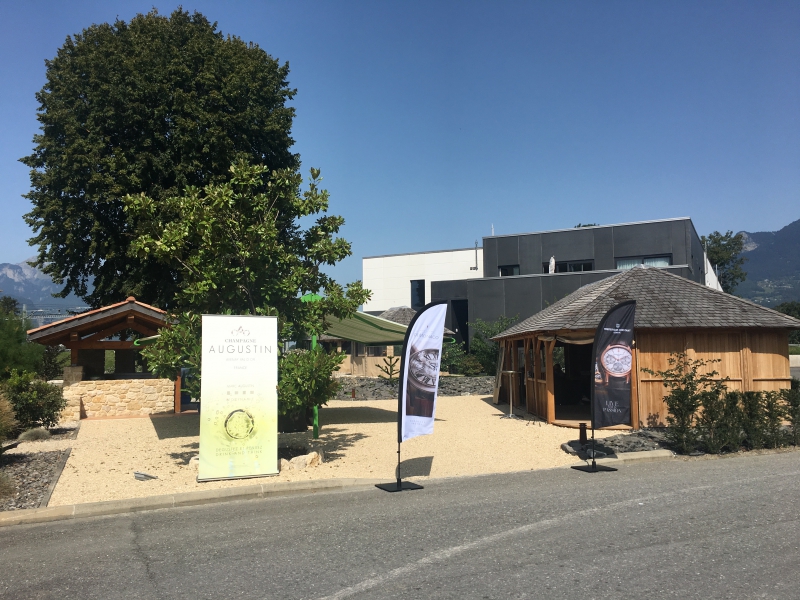 The 7th edition of the Retrospective Ollon-Villars have gathered about 250 drivers in the heart of the vaudoises Alpes.

The amazed onlookers have had the chance to see collection’s cars like:

Sharing the same passion of the mechanics, precision and aesthetic, the cars lovers have had the opportunity to try the Ateliers deMonaco timepieces at the VIP corner.