In celebration of the Loy Krathong festival, Ateliers deMonaco has created a new piece called the Tourbillon – WAT ARUN. This traditional “fête-des-lumières” is one of the most beautiful and famous events in Thailand. It is celebrated annually on the night of the twelfth lunar month. It celebrates the end of the rain season and honours the water spirits. People release shaped rafts made of banana leaf and decorated with candles and flowers, which then float onto the river.

This temple has been named after Aruna, the Indian God of Dawn. It is a representation of Mount Meru, the iconic representation of the center of the world in Buddhist Cosmology. In Thailand, there are over 31’200 Buddhist temples and the Wat Arun temple is the most famous one, thanks to its recognisable design. The design is very different from the other temples; it is partly made with tiny pieces of coloured glass and Chinese porcelain placed delicately into intricate patterns.

The dial of the Tourbillon Wat Arun required an extraordinary 200 hours of work. It is composed of 3 layers of solid 18K White gold, all applied by hand and a Tourbillon opening which naturally draws attention to this mechanical wonder. The most beautiful part is the hand-engraved dial showing the Wat Arun temple, as iconic as our unique timepieces. We can distinguish around the temple’s engraving the four-corner prang of Wat Arun, which house image of the guardian gods, Nayu, gods of the four direction.

The hand-engraved details give this watch its own personal touch and makes it a one of-a-kind creation. This has been realised by Bernad Ditzof, our master engraver, which skills are incomparable and make him one of the few people in the world that can master such dexterity and method.

This art-piece is cased-up in an 18 carats white gold polished case contrasting with the brushed white gold dial. The front and back are made of sapphire crystal exposing the finest details of the patented “eXtreme Precision 1 minute” tourbillon and its hand-engraved 22K solid gold rotor. This tourbillon movement is known to be the most precise tourbillon movement in the world with a tolerance between 0-2 seconds per 24 hours. The calibre is adorned with 29 jewels and a sapphire tourbillon bridge.

The timepiece is finished with a hand-stitched alligator leather strap and comes with an 18 carats white gold folding buckle. This watch is a timeless piece of art which will endure forever like the beauty of the Wat Arun temple. 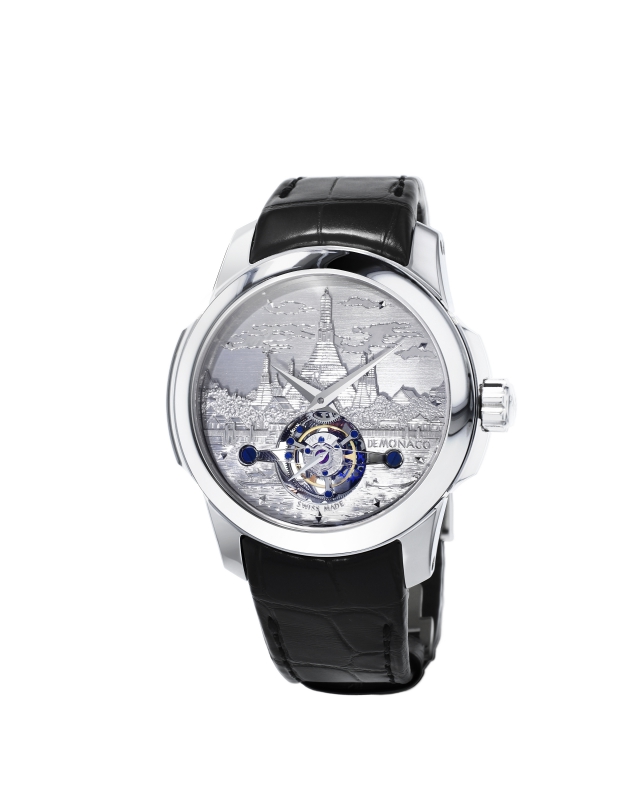